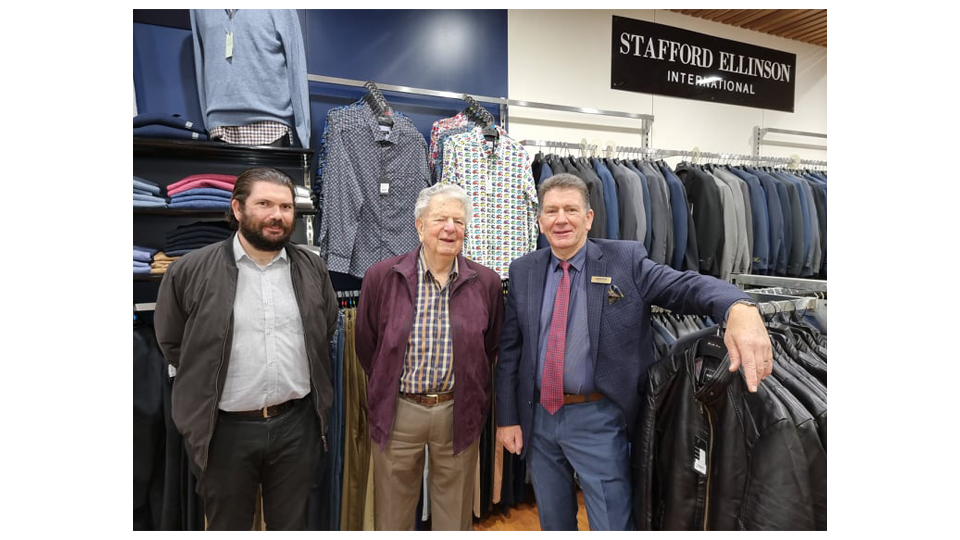 This is where Ronalds adventure began with is own self branded store in Lilydale, followed by in 1969 a Bayswater store (opened for 3 years), then again in 1973 Croydon Main Street doors also opened for the first time as Ronald King.

Ronald has memories of the 1939 war as which time he was sent down to a menswear shop in Wagga Wagga to pick up some clothing, he remembers being so impressed with what he saw, he can recall his 12 year old voice saying to himself ‘I want to have one of these one day’ What a dream!

Ronald went to school in Wagga Wagga when he was 18 years old he moved down to Melbourne, he worked for a store called Walkers in Glenferrie for 8 years then changed to a career as a travelling Sales Agent for a clothing manufacturers. In 1948 a young lady called Brenda immigrated from England met Ron in a church and were married in 1950. Ron and Brenda raised 4 sons, David, Malcolm and twins Andrew and Jonathan. Malcolm and Jonathan went in the building industry and David and Andrew followed in their fathers footsteps in retail clothing. In 1965, spurred on by a neighbour and a local Jeweller, Ron left repping.

How did it all happen?

The Jeweller, Henry DeCrue, encouraged Ron to open next door at 207 Main Street Lilydale. Ron went home and discussed his idea with Brenda … approached the bank, took out a 2nd mortgage on the family home and opened the first Ronald King Mens & Boys wear on the smell of an oily rag. With only 600 pounds in the bank and a second mortgage on the family home in Hull Road Croydon, he took the plunge. Ron was able to negotiate 90 days credit terms from the few suppliers that would supply him with stock. With a wing and a prayer (no luck) the dream of Ronald King Mens and Boys Wear Lilydale became a reality.

How Andrew King came into the story …….

From the age of 12, Andrew started work at the stores assisting during school holidays and after school. At the age of 15 he left school to work in the family business with Ron and David. Andrew whom we know, stayed in the business he loves. andrew and his wife Meredith have owned and managed the business since 1995.

Andrew Continued the Business after Ronald retired. Andrew and Beautiful wife Meredith had 4 children whom have also all worked in the business at one time or another. Jacob, Andrew and Meredith’s son has been working in the business for the last 25 years for Croydon and Lilydale stores.

Andrew decided to close the Lilydale store on Christmas Eve 2020, as he wanted to consolidate the business into one. Croydon is now Bigger & Better than ever before with a great team Marjorie, Sandra, Iris, Geoff (the store Manager) Amber, Kira, Hayley, Jack, Suzanne, Leanne and Jacob.

The store has expanded into a Great Ladies wear range with Brands such as Cafe Latte, Renoma, Orientique, Vivid, Bromley Knitwear, Maglia and more.

When you walk into Ronald King, you are always greeted with a smile and fantatsic experienced staff to assist with any of your needs.

‘Pleasant shopping experience with plenty of Australian brands for men and women. A range of ages and styles are catered for and there is almost always good availability of sizes. Surfwear/casual through to formal and a huge range of men’s shirts and jumpers. A good selection of accessories as well. Conveniently located in the main street and on one level.’ – Jo

If you had not had the pleasure of a Ronald King / Matches Surfwear browse I suggest you do, as you will not be dissapointed.

Back to all articles